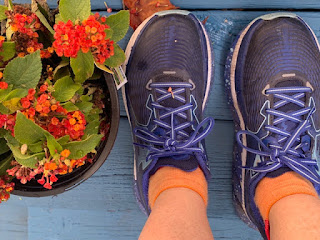 I've been thinking a lot about humility lately. About starting over from a humble beginning. Maybe after a fall.


The difficulty. The pain. The shame, if we let that in. So much pride wrapped up in who we were.

I've been struggling for more than two years now, to stay balanced, to maintain some kind of equilibrium with all the tremendous changes I've had thrown at me. For two years, I've reacted, rather than acted. I've ridden the waves, dodged the swells and barely stayed afloat. I have NOT thrived.

I have also not grabbed the reins in any definitive way at all. If you're constantly reacting, there is no room for action.

I haven't known where or how to start, what to do or not do. As a result, I found myself in a kind of unhealthy stasis; eating too much, drinking too much, doing too little. I'd have bursts of determination, sparks of fire that never flamed. I kept trying, in my way. But nothing seemed to stick.

Should I find a therapist? Probably. Will I, anytime soon? Not likely. Our current travel-filled lifestyle makes that difficult. So, what then?

Today, after a very humbling 5K race two days ago, I laced up my running shoes and left the house. It felt terrible at first. I just kept thinking about how slow I am, how heavy I've gotten, how out of shape. My mind was in control, for sure, and she wasn't being very nice.

Pretty quickly, though, I reached the lake. The beautiful Superior. And my bitchy little mind was pacified for a while and shut the hell up. The waves, the sunshine, the rocks. A nice log to sit on. That was it - I was finally out of my head and into my body. 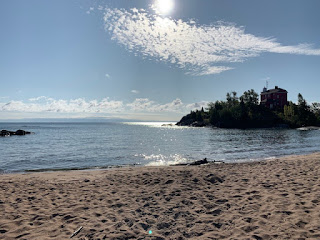 Don't get me wrong - the run still felt hard and I still needed to walk from time to time. But now there was no nagging, negative inner voice narrating and criticizing. The body was steering the ship now and the mind was reflecting on that; the feel of my quads and glutes on the (endless) hill climbs, how my breathing felt, the sound of the water and the warmth of the sun....

And then, when I sat down after my shower to write, I found this quote by Florence Nightengale:

Just in case I didn't make the connection myself (and it's likely I wouldn't) here's Ms. Nightengale reaching across the years to remind me what, as a yoga teacher and running coach, I should already know.

Could it be that easy? Of course not. We are complex beings and panaceas just don't work. But is it a good start? I'll let you know. All I do know is that what I've been doing hasn't worked. So I'll give this a try - letting the body lead by paying more attention to it and treating it a little bit better. If nothing else, I'm hopeful it can help me get out of my head a bit more.

Popular posts from this blog

September 09, 2019
Remember that last post? About humility, listening to your body and letting the body lead? Maybe as a way to quiet the mind? It sounded good, didn't it? I was (am?) determined to be smarter with my training and to be kinder to my aging body instead of pushing myself through injury or trying to improve too much, too rapidly.

The results seemed good. I was able to get in some consistent runs and slowly build up what felt like a bit of stamina. I was finding some joy in the run again and connecting with my body in a positive way. It was early days but it was working!

And then, we went for a hike.

Friends of ours from out of town came for a visit and of course, we wanted to show off this big, beautiful backyard that we enjoy. These specific friends are not runners and not especially outdoorsy but we chose a shorter hike with the pay off of some nice waterfalls. What could go wrong? Except forgetting that this particular hike was actually much more of a scramble....